current project
moonless
all I (don't) want to know about you

Inuyasha is jolted awake by Kagome’s scream. It takes a few moments for him to register what is happening — the new moon, Kagome standing in front of him, using her body as a shield and the strong youki seeping through the air. He takes a defensive stance and reaches for Tessaiga out of habit. The sword won’t help him much while he is in his human form.

“What’s happening, Kagome?” he asks, but the girl is not paying any attention to him. She’s looking straight ahead, focusing on something—someone.

“I don’t know what do you want, but I think you should leave.”

“I have no business with you, woman. Move along.”

Joe doesn’t miss people. He has nobody to miss and he’s certain nobody would miss him if he was gone either.

He doesn’t miss Rikiishi, not really. The bastard lives in his mind at this point, and Joe gets to see his shit-eating grin every time something goes wrong, taunting him even in his ghost form. There’s nothing to miss here.

He doesn’t miss Nishi either, even though he sometimes catches himself wishing for a good spar with the guy. The fact that he’s moved on with his life and quit boxing is bittersweet, but Joe gets it. They’re different.

He can’t even fathom missing Yoko, as she gives him no chance to even think about it. She’s always in his business. Still, he feels like he owes her. If it weren’t for her he wouldn’t be here, thinking about missing someone for the first time in his life.

all I (don't) want to know about you: chapter II

Sesshomaru never went unnoticed. It was his thing; wherever he went and whomever he went with, he would make an impression, regardless of his intention. Inuyasha was the exact opposite, and it was both a blessing and a curse. Contrary to popular belief, being Sesshomaru’s younger brother wasn’t the best experience — his brother’s popularity did not extend to him, but his shadow did.

It wasn’t something he ever talked about, not even with his friends, because one, it was not their business and two, it was embarrassing. Whenever he found himself in the same room as Sesshomaru, he felt overwhelmingly inadequate. Like he was too small, trying to compensate for his size with loudness and obscenity, traits that were so very foreign to Sesshomaru.

The quest for the Sacred Jewel: A look at the Queer narratives of InuYasha

When I started reading the Inuyasha manga, I didn't have the idea of writing an in-depth meta analysis of its queer themes and narratives in mind. I simply wanted to relive my childhood. Yet here we are. I was surprised at how easy it was for me to identify said themes while reading, so I knew I had to take one for the team and write something on it. The most curious thing about the whole situation is that a story in which heterosexuality and gender binaries are so prevalent could hold such a rich queer intertextuality. We're talking about the same manga in which the sole gay character is a breathing, walking stereotype; he's a villain with a perverse infatuation with the main male characters. He looks and acts feminine, and is often condemned for being attracted to males. Meanwhile, Miroku, an actual sex offender is exempt from said prejudice just because he is a heterosexual male that preys on women. Anyway, the point is that heterosexuality and the gender binary are the norm of the Inuyasha universe; we are presented with an (not that) intricate love triangle between the main character, a priestess and her reincarnation. The main villain's — again, a heterosexual male — motives revolve around said priestess. Everything that strays from the strongly established status-quo, everything that is remotely queer, is condemned.

all I (don't) want to know about you: chapter I

Like most shitty things in Inuyasha’s life, this one—arguably the shittiest of them all—started with Miroku being a slut.

“Your brother is kind of hot. Do you know if he’s single?”

Both Inuyasha and Sango choked on their noodles while Kagome only laughed at the question. They were supposed to enjoy their lunch break in peace, eat good cafeteria food and gossip. At worst, Miroku would have brought them up to speed with the latest details of his very adventurous sex life.

“You did not just ask that,” he said, irritated. He briefly tried to picture Sesshomaru and Miroku together and no, totally not happening. Not in a million years. 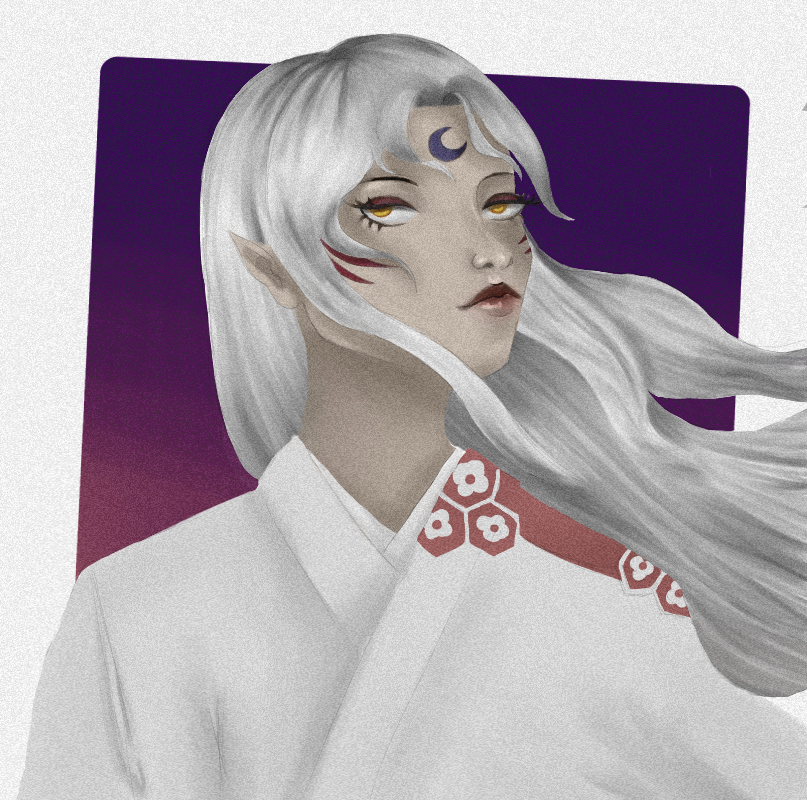 For someone as loud and obnoxious as Inuyasha, he certainly knows how to disappear without a trace, Miroku has to give him that. Neither Kagome nor Sango comment on his frequent disappearances, but Miroku can’t know if it’s because they haven’t noticed yet, or they simply decided to brush it off. Miroku decides not to be the one who points it out to them; Kagome or Shippo might get the idea of following Inuyasha, and the monk feels that whatever demands Inuyasha’s undivided attention once a few nights might be dangerous.

Of course, he takes one for the team and decides to follow the hanyou by himself, because he’s altruistic like that. And maybe because curiosity got the better of him, but that’s not something that he’s willing to admit.

"To think you'd have at least enough decency not to summon me while you're covered in bile and guts," Sesshomaru says, visibly disgusted by the sight of the hanyou’s filthy body.

"Shut up! I thought I'd have enough time to bathe before you appeared. It's not my fault the yokai I just fought exploded and spread his fucking guts everywhere."

"The yokai you just fought? I never thought you were that foolish, Inuyasha. You merely make it alive from the battle and the first thing you decide to do is have sex? Despicable."

“You tried to kill me,” Inuyasha says matter-of-factly, to which Sesshomaru does nothing but raise an eyebrow, unimpressed. Still, his hanyou brother learned to read him already. "Last time we met, in the serpent-demon's liar, you tried to kill us.’’ he clarifies, “And now you call me here? You expect us to pretend nothing has happened and we're just... what?"

“I fail to see what the problem is. I tried to kill you multiple times in the past. It hardly stopped you from agreeing to partake in this activity.”

Inuyasha sighs with chagrin. Clearly Sesshomaru understands that this is different. He must understand that their little tryst implied that they would take a break from harming each other. It wasn’t like they cared about one another, not at all – Inuyasha despised his asshole of a brother just as much, and he was sure the feelings were mutual, but he imagined that they would at least tolerate each other more than the few hours they were required in order to make this happen.